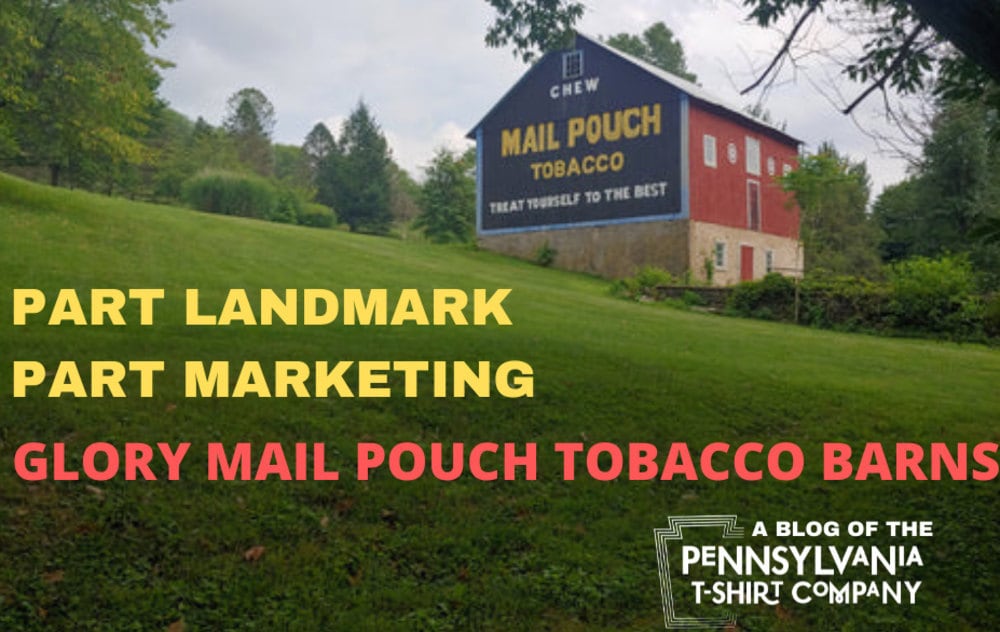 Disclaimer: The Pennsylvania T-Shirt Company doesn't condone the use of chewing tobacco. Chewing tobacco is harmful to your health.  We are talking about the barn and the artwork, not the product.  Thank you.

Starting in the 1890s, traditional barns seen on roadsides began getting bright paint with simple messages inscribed on them. No, it was not the precursor to the graffiti age we’ve seen. It was an extremely clever marketing strategy. What we now see as a historic landmark was once an innovative, state-of-the-art advertising scheme.

These Usta’ Be All Over the Place

The year 1879 saw the introduction of the Block Brothers Tobacco Company. The company began producing cigars until it grew enough to the point it expanded to mail pouch chewing tobacco. With regional success, the company wanted to expand further. This required marketing their new product.

Because of this desire, the Bloch Brothers Tobacco Company showed its true genius. The company realized they had the perfect advertising canvas sitting there waiting to be used. Like an untouched gold mine, the company began asking farmers if they could paint their barns in return for payment. The farmers agreed naturally, as they benefited monetarily and through the upkeep of their barns. The barn owners could get anywhere between $1 to $2 each year for the advertisement. However, the real upside of the painting was not money for the farmers. 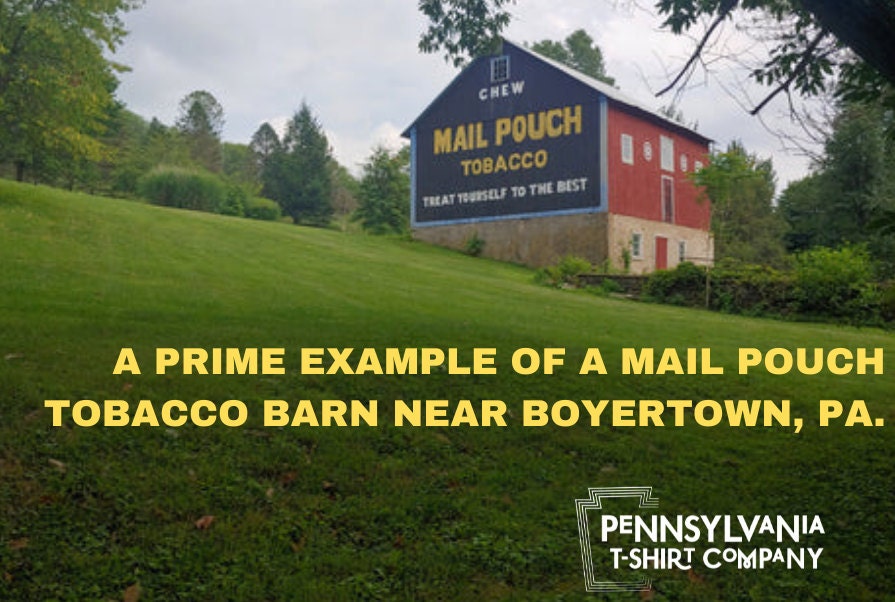 The Bloch Brothers Tobacco Company used professional painters to liven up roadside barns with bright colors and direct wording via protective paint. The company would paint two sides of the barn for their marketing purposes and let the farmer choose how they wanted the other sides painted. Thus, barn owners received the real reward via a fresh paint job. Often, the barns got a fresh coat of paint every few years, too. So, while they received some financial incentive, their barn's lifespan also increased.

On any given barn, potential clients were struck with words saying,

“Chew Mail Pouch Tobacco Treat Yourself to the Best”.

If that doesn’t convince someone in the early 1900s to buy tobacco, what will? The Bloch Brothers Tobacco Company was smart with their wording. They cut straight to the chase—buy our tobacco!As this partnership between barn owners and the Bloch Brothers Tobacco Company blossomed for years, thousands of barns were painted. After World War 2, the company ramped up the paintings. One of the famous painters, Harley Warrick, claims to have painted 20,000 barns during his tenure with the company. Harley was not the only painter, either, meaning there are tens of thousands of barns around the US. On each barn, the painters left their mark. Somewhere on the outside of the barn, the painter’s initials can be found. Some other painters were Dick Green, Mark Turley, and Don Shires. 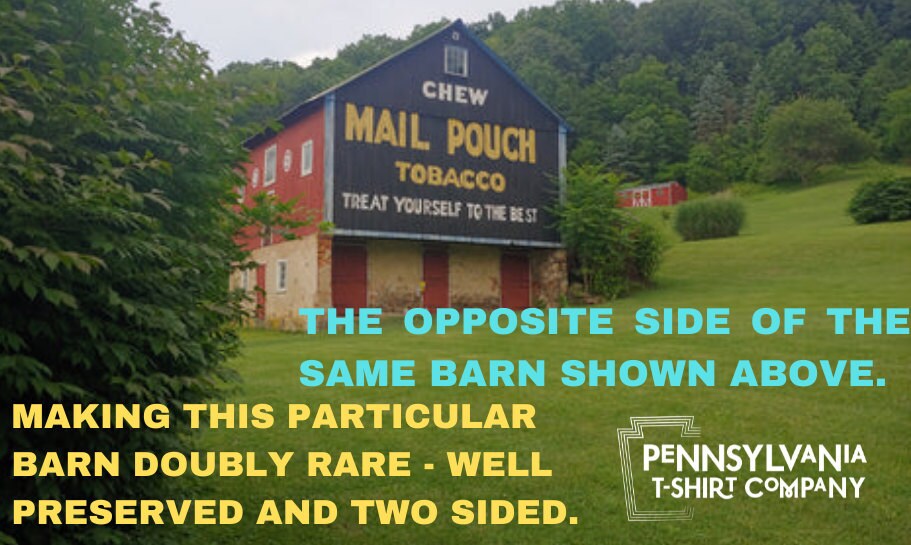 Beyond the Golden Age of Mail Pouch Tobacco Barns

In 1965, Lyndon B. Johnson passed the Highway Beautification Act. This new law ended most highway advertising to help clean up streets and make them more appealing. However, this act let the mail pouch tobacco barns slide.

An amendment passed in 1974 made the barns historic landmarks. Today, we have that amendment to thanks, as now Pennsylvania and many other states are blessed with the icons. Although this advertising scheme seems ancient, the impact it had is tangible. Think of all the advertising through billboards. 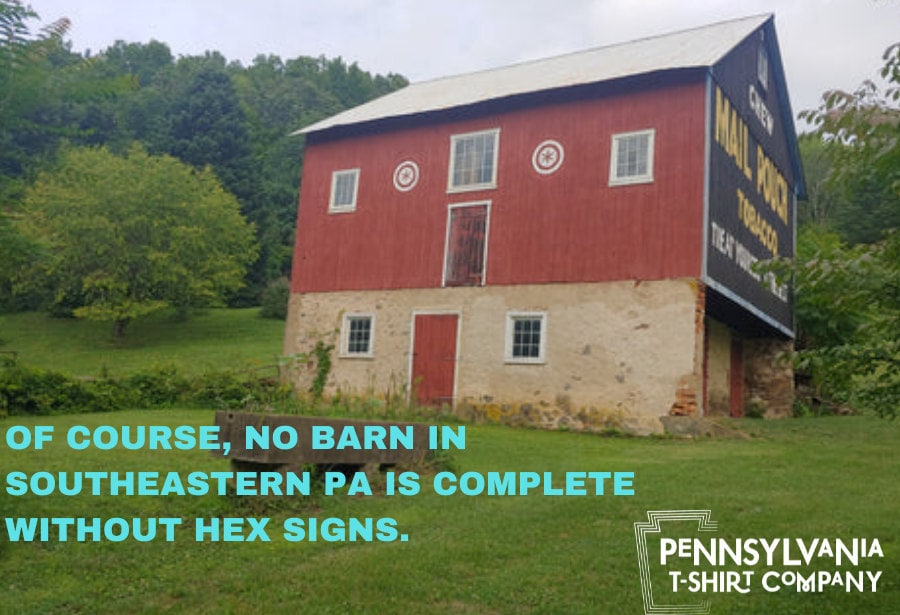 These barns may not seem important to some passersby, but with a little knowledge of their history, they seem more attractive. These old barns were advanced forms of advertising combined with a beautiful mutually advantageous relationship—farmers and a business both benefited from this collaboration.Today, Pennsylvania has many mail pouch tobacco barns. Those interested can find some of these barns in Bedford County, Cumberland County, Washington County, and more! Take a road trip through southeast Pennsylvania and you’re sure to find some of America’s interesting history. If you’re feeling proud of your culture, why not buy a T-Shirt? Or a Hoodie? Or any other locally-themed apparel featured at the Pennsylvania T-Shirt Company.

Next Post Original Gangster County of Pennsylvania: Chester County
0 items in your cart